Jakarta | Kevin Sanjaya Sukamuljo/Marcus Fernaldi Gideon is successfully defending the Blibli Indonesia Open 2019 BWF World Tour Super 1000 crown. The Minions is able to be the best in this tournament after beating their own compatriot, Hendra Setiawan/Mohammad Ahsan in a two-set match of 21-19 and 21-16 that was held in Istora Senayan, Jakarta, on Monday (21/7).

“In the first set we were a bit nervous and we receive a lot of pressure. But in the second set we managed to play better. We all have trained together in Cipayung, so we know each other’s strengths and weaknesses. Hendra is very good front-line player. But, I always give out all my best abilities,” said Kevin Sanjaya Sukamuljo after the match.

“Speaking about the focus, we have to always stay focused in every match that we play. It’s a shame if we have come all the way to Japan just to let our focus off the game. We will keep evaluating our performance, as we still have many weaknesses,” he said.

“What’s important to us is to improve our training. There will be a lot of evaluation that we will do after this. I understand that all players want to beat us as we are the current World’s No. 1 pair. And I believe they all will study our plays. That’s why we also have to learn the opponent’s plays,” he added.

Furthermore, Kevin claims that he will keep trying to show his best performance in this point collection period for the coming 2020 Tokyo Olympics. “I think everyone has the same chance of going to the Olympics. So we have to wait and see how it will turn out when it gets closer to the 2020 Olympics,” Kevin said.

In contrast, although ending the tournament as a runner-up, Mohammad Ahsan claims that he feels very grateful with the result that he has achieved in Blibli Indonesia Open 2019 BWF World Tour Super 1000. “First of all, thank god, I have to be grateful as we have made it to the final. Although it may be true that during the match Kevin/Marcus was better than us. They were clearly faster and we were a bit troubled by that. We would like to say congratulation to both Kevin/Marcus,” Ahsan said.

Similar comment was stated by Hendra Setiawan who claims that Kevin/Marcus’s performance was better than them in the final match of the tournament. In addition to that, Hendra also hopes that the Indonesian Men’s Doubles team can be more consistent in terms of collecting achievements.

“It’s true that the Indonesian Men’s Doubles team’s performance is currently very good, here we have the World’s No. 1 pair, we have us and Fajar Alfian/Muhammad Rian Ardianto. Hopefully we can be more consistent and can contribute a gold medal in the coming 2020 Olympics. It’s important for us to keep up the training and preparation,” said Hendra. 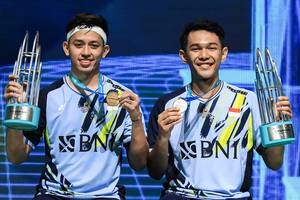 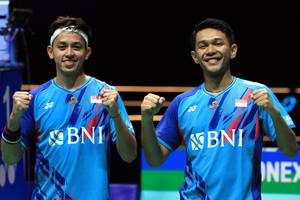