Jakarta | The Men’s Singles event throne of Blibli Indonesia Open 2019 BWF World Tour Super 1000 is finally claimed by the Taiwanese player, Chou Tien Chen. After playing through the match that lasted 91 Minutes in Istora Senayan, Jakarta on Sunday (21/7), Chou finally reaches the highest podium of the tournament with the score of 21-18, 14-26, and 21-15 over the Danish player, Anders Antonsen.

“This match was very good and very tight. Antonsen and I have showed our best performance to give the best result out of the match. Thank god! This is the title that I have been waiting for so long. I feel so happy, as this is my first title in the tournament of the Super 1000 level, and I will keep trying to replicate this kind of result,” said Chou Tien Chen to Djarumbadminton.com

The world’s No. 3 Men’s singles player looked very emotional when he was celebrating. Chou even showed tears of happiness after securing the title of this tournament.

In contrast, Anders Antonsen claims that he feels a bit disappointed as he has to end the tournament as a runner-up. However, the Danish player also claims that the final match was a long, tense and tiring match.

“First of all, congratulation to Chou for winning this title and thank you for the amazing battle tonight. This has been a tight, long battle and certainly a battle of endurance. The point is, congrats to Chou. He has fought very well,” said Antonsen.

“I started the match a bit late. On the third set I made a lot of errors. But I managed to stay calm throughout the match,” he added.

“I am unseeded in this tournament, but I felt that I have the chance to win the title. I am very happy with the result. Maybe this is the right time for me to shine,” he said. 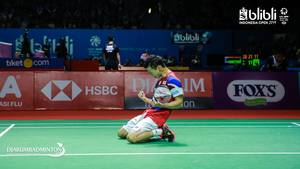